Find out about photographs

Provides concise explanations of the terms most frequently used by curators, collectors, and historians to discuss and describe photographs, especially those terms “likely to appear on descriptive labels in exhibitions or in catalogue entries.”

Provides basic biographical information on 2,000+ photographers and innovators in the field (including roughly 500 from the 19th and early 20th centuries); each entry also lists publications, portfolios, collections, dealers/representatives, and address.  Photographers were chosen on the basis of “dedication” (photography had to be “a major passion”) and “visibility” (work had to be available in photographic books, journals, museum collections, or through grants and awards, though being well known was not a criterion).  Includes inventors, photographic curators, museum directors, gallery owners, photo-historians, and photography critics in addition to photographers.

Aims to be “an essential reference work for anyone interested in the medium of photography,” based on scholarly research that has “established the role of many hitherto unrecorded figures, measured the achievements of many of the leading practitioners against contemporary appraisal of their work, and placed the history of photography’s first century within a social and economic context.”  Includes articles on major inventors, manufacturers, organizations, and supporters of the medium as well as key photographers.  Access points are provided by an alphabetical list of entries, a thematic list of entries, and a thorough index.  Each article includes cross-references and bibliographies.

Includes numerous technical entries (e.g. substantial articles on lens development and three-dimensional photography) as well as articles on photographic theory and techniques.  Contains many national and regional entries not available in other reference books (e.g. Africa and Scandinavia).  Strong in Japanese and Chinese photography.  Strong emphasis on photography as a social and political practice, with articles on tourism, advertising, propaganda, military photography, and photojournalism.  Art photography is also well represented.  Includes a limited number of biographical articles.  Most entries include bibliographies.

Exhibition catalogue on the history and techniques of all processes used to print pictures, including planographic, intaglio, relief, photographic, digital, and more. The accompanying website has a wealth of additional material.

Definitions, explanations, and in some cases illustrations of terminology, technical procedures, equipment, and materials in the field of imaging technology.  Cross-references help to clarify relationships between the many terms that were coined and invented in this fertile field.  Does not include biographical entries, but an index to proper names allows finding who invented or used what.  Each entry includes at least one reference for further reading, and most include many.   Includes an index of German terms.  This edition is a one-volume reprint of two volumes published in 1989 and 1990, so there are two sets of indexes that must be consulted separately.

Especially useful for technical definitions; also includes biographical entries and entries on theory, history, and antiquated processes.  Technical details and definitions are well illustrated with black-and-white line drawings.  Each alphabetical section begins with a list of abbreviations that begin with that letter (e.g. LED: light-emitting diode).

Scholarly discussion of 20th-century photography history introduces the reader to a history of the technical issues that have changed over the century, defines the concepts, terms, and themes that evolved over 100 years, describes the role of institutions and publications in the shaping of that history, and explains the development of photography in specific countries and regions around the world.  Gathers information on “the most often cited names, terms, concepts, processes, and countries,” and provides the historical and theoretical contexts for understanding each entry.  Includes extensive cross-referencing, substantive bibliographies, analytical index, and 600+ illustrations.

Charles Négre, Kitchen of the Imperial Asylum at Vincennes 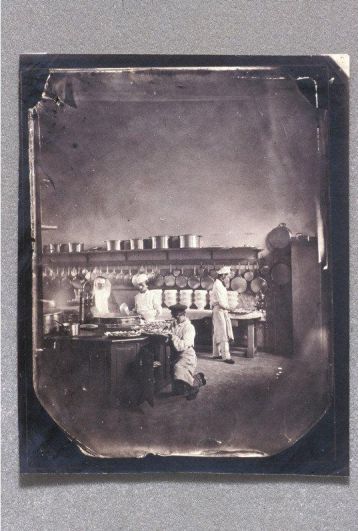