Locate other titles in the Clark library by doing a KEYWORD search in the library catalog for any of the following subject terms.  Enclose phrases in quotation marks.   (Example:  “art thefts”)

Imitator of Constable, River View - a Clark painting with a fascinating provenance history! 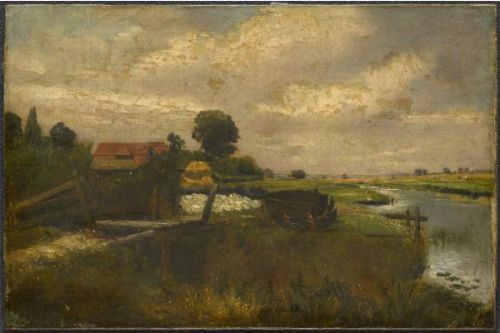 Between 1938 and 1945 this picture had a very complex history, reflected in a number of labels and marks on the back of the painting. The label “Oscar Bondy Wien No. 538” attached to the canvas probably reflects Bondy’s own numbering system. In May 1938, Bondy and his wife fled via Switzerland to the United States, where he died in 1944. The work appears as no. 5, Flusslandschaft, haus m. rotem Dach (River Landscape, House with Red Roof) by Constable in a list of items (dated 3 April 1939) seized from Bondy’s home. See Lillie 2003, p. 222.

The painting next went to Kremsmünster, Austria, where it was labeled on the stretcher with the number K 1687. It therefore appears to have been designated, along with much of the rest of Bondy’s collection, as going to Hitler’s planned Führermuseum in Linz, although it was not ultimately chosen for inclusion. It does not appear in the photo albums published in Schwarz 2004 or in the Deutsches Historisches Museum’s database of Linz objects.

Three labels now removed from the painting reflect the property inventory number assigned by the Nazis, 1318 O.B. It appears to have been stored by the Nazis at Alt Aussee, then entered the Munich Central Collecting Point on 17 Oct. 1945 as no. 9883, to be restituted by American forces, and was turned over to Austria (under control of the U.S. Fifth Army) on 25 Apr. 1946. The number 111403, written on the stretcher in the same red pencil as “USFA” (U.S. Fifth Army), has not been identified. For information on the Munich Central Collecting Point, see http://www.dhm.de/datenbank/ccp/dhm_ccp.php?seite=9&lang=en. It was then returned to Mrs. Bondy in New York.